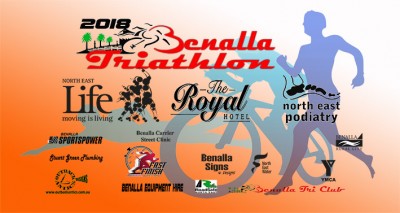 The Benalla Triathlon WILL be held this year! See below for details of this years' event.

RACE RULES
Tri-Australia Rules apply. Swim caps must be worn and wet suits are allowed (although if it is very hot they are not recommended). Drafting is not allowed. 5 minute Penalty Box will be used. A shirt must be worn during the ride and run. Shoes must be worn on the run course.

LATE ENTRIES
Accepted on race day- CASH ONLY + LATE FEE -will cost you an extra $10 for entries on race day.

RACE BRIEFING
15 minutes before the start of each race.

Cost: $20 per child (to cover club membership and insurance)

Safety: The swim and cycle legs will be supervised closely by adults. Kids will swim along the shallow edge of the lake. Cycle will take place partly on the lake footpath, and partly on a traffic managed side street.

Rules & Regulations for your safety..

General
Competitors must:
• Practise good sports conduct at all times
• Understand and follow Triathlon Australia Race Competition Rules (TA RCR)
• Obey instructions from event officials
• Obey traffic regulations unless otherwise instructed by an event official
• Treat other competitors, officials, volunteers and spectators with respect and courtesy
• Keep on the designated event course
• Not wear electronic devices eg IPOD, mobile phone etc
• Not obstruct or interfere with the forward progress of another competitor or jeopardise the safety and welfare of another competitor or race official or spectator or member of the public
• Only accept assistance from an event official
• Not discard any equipment on the course except at approved dedicated locations (do not litter)

Transition
All bags should be removed from transition prior to transition closing for the start of the event.

Swim
Competitors:
• Must wear the swim cap provided
• May use any swimming stroke for propulsion through the water.
• May tread water or float
• May stand on the bottom or rest by holding an object eg boat, buoy or paddleboard. However, they must not make forward progress whilst doing this.
• Should raise an arm overhead and call for assistance in an emergency. If assistance is rendered beyond resting, the competitor will be deemed to have not finished the event.
• May wear wetsuits depending on the water and air temperature at time of event
• Must take all their equipment ie swim cap and goggles to their designated rack in transition
• Receiving an infringement penalty may be required to serve a Stop-Start Penalty with the Technical Official where the infringement occurred on the course.

Cycle
Competitors:
• Must wear footwear and a top
• Must wear a helmet approved by a testing authority and it must remain securely fastened at all times once the bike is removed from the rack, on the bike course and until bike is replaced on bike rack.
• Must cycle in single file on left hand side of bike course unless passing. Failure to do so will incur a penalty for a blocking infringement
• Must keep a distance of 7 meters between leading edge of front wheel of the forward bike and leading edge of front wheel of following bike, unless passing.
o Have 15 seconds to pass through the 7 meter draft zone and must be gaining on the forward competitor at all times. After passing must move to the left when safe to do so.
o Competitor passed must immediately drop back out of the draft zone of forward competitor before attempting to repass. Distance between two competitors must be increasing.
o Failure to observe the above will result in a penalty for a drafting infringement.
• Must pass on the right hand side. Failure to do so will incur a penalty for an illegal pass.
• Reported for drafting, blocking or an illegal pass, may be shown a blue card by a Technical Official. They will be asked to confirm their race number, be told of the infringement and to report for a 3 minute time penalty at the next Penalty Box on the cycle course.
• Draft zones may overlap for safety reasons, leaving or entering transition and when making an acute/U turn.

Run
Competitors:
• Must wear shoes and a top
• Receiving an infringement penalty may be required to serve a Stop-Start Penalty with the Technical Official where the infringement occurred on the run course.
Penalties
Infringement of the rules may result in one of the following penalties:
• Stop-Start penalty to be served with the Technical Official where the infringement occurred on the course. Generally swim, transition and run segments of the course.
• Blue Card on cycle leg of course is shown for an infringement then a 3 minute time penalty must be served at the next Penalty Box on the cycle course. Two or more blue cards may result in a disqualification.
• Red card is shown for a major infringement. Competitor may complete event but Race Referee will rule on the infringement at conclusion of event and if ratified, competitor will be disqualified.

FIRE DANGER: If the Fire Danger is Extreme or Code Red, the cycle leg will be cancelled. The triathlon will still take place, however in a different format.

RACE RULES: Please follow this link to read the full set of triathlon race rules, from Tri-Australia. A more abbreviated set of rules mat be downloaded below, in dot point form for your information. Please also note that the time penalty for drafting/blocking/illegal pass/littering on the cycle leg of triathlon is 3 minutes for the sprint distance.

Here are a collection of previous years' results from the benalla triathlon. Click on the links below to view.